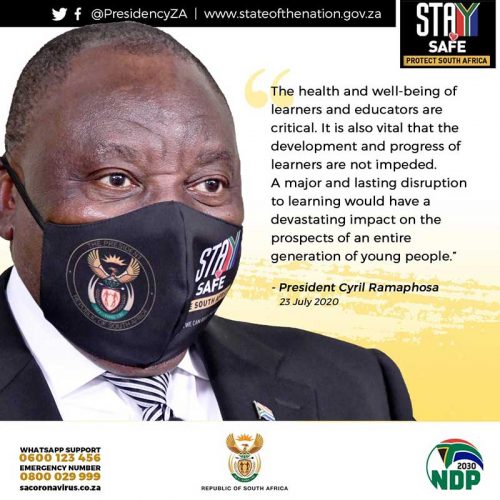 Last night (July 23, 2020) President Ramaphosa addressed South Africa. The real Coronavirus outbreak is now emerging. Meanwhile, the low number of infections has grown to more than 408,000 infections in 2,600,000 tests taken, resulting in more than 6,000 deaths. Still we see limited testing and monitoring on a total South-African population of 60 million.

South Africa remains in stage 3 when it comes to fighting the Covid-19 virus, but with new tightening. Public primary schools will close again for a period of 4 weeks and will therefore not reopen before September 1, 2020
The Bambanani schools also remain closed until at least September 1, 2020.

The Bambanani emergency fund is doing its job, the estimates for developments in South- Africa are good and so we are well prepared for the near future when it comes to the welfare of the children attending the Bambanani schools.
It is great to see that the South African government is now also introducing a food program, in which the food is collected by the students themselves at school. A step that we as Bambanani already introduced on April 15.

Unfortunately, the first victims among the teachers have fallen in the past two weeks. The underlying suffering is great in countries such as South Africa and Corona is often disastrous. Truly in-depth research does not take place in rural areas (townships), so the picture is very distorted.

Economically, things are not going well in South Africa. Tourism is down, aid measures are in place and an anti-corruption policy was immediately introduced. The sale of alcohol and tobacco has been completely stopped for some time. The ban on alcohol has led to a major drop in hospital emergency rooms, while tobacco has a negative effect on the lungs.

Finally, Ramaphosa makes a clear statement when it comes to education.

“The health and wellbeing of learners and educators is critical. It is vital that the development and progress of learners is not impeded. A major and lasting disruption to learning would have a devastating impact on the prospects of an entire generation of young people.”